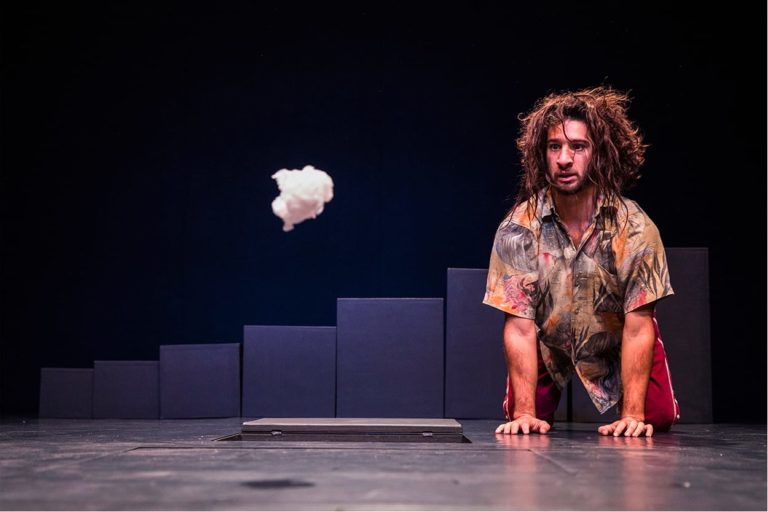 “Bestiaire“ is a performance where the body speaks and puts us face to face with the raw energy of animals. Like a showman from a traditional circus, acrobat Hichem Chérif exhibits the animals that live in him. Without masks, he changes his human nature and becomes a quadruped, a bird, a primate. „Bestiaire“ is a contemporary display of a traditional circus where the artist who is shown off is neither a freak nor a daredevil of an extravagant discipline, but a member of the human menagerie who looks like us. Source of surprise and wonder. This performance transmits to the youngest to think off the beaten track, to dare to cross the barrier of conventions.

The performance is directed by the famous French artist Jeanne Mordoj. Jeanne Mordoj innovated the world of contemporary circus with her performances in which she presents herself as a bearded woman, contortionist, hen woman, cat woman, ventriloquist… phenomenas that are free and wild, mischievous and serious, just like the artist herself.

The performance is realized with the financial support of French Institute in Paris in partnership with Teatroskop (part of the “Circus (must) SEE” program) and the French Institute in Zagreb (part of the “Rendez-vous inattendus – Unexpected rendez-vous” program). The performance is also realized with the financial support of Kultura nova Foundation and the Ministry of Culture and Media of the Republic Croatia.

Tickets can be bought through the Entrio system – through webshop https://www.entrio.hr/event/festival-neobicnih-obitelji-11450 or stores: Dancing Bear (Dioklecijanova 6) and City Center One (Ghetaldus and Tisak Media shops). If you are located outside Split, find the closest store at https://www.entrio.hr/outlets.

Tickets can be bought at the City Puppet Theater for the performance “La Crisis de la Imaginacion” an hour before the start, and for other performances on Friday (June 10th) and Saturday (June 11th) at the Open Air Cinema Bačvice from 10 am.

You can purchase tickets at WEBshop, in Entrio stores, at City Puppet Theatre (an hour before the performance) and on June 10th and 11th from 10am at Open Air Cinema Bačvice.